The new King of the Jungle! 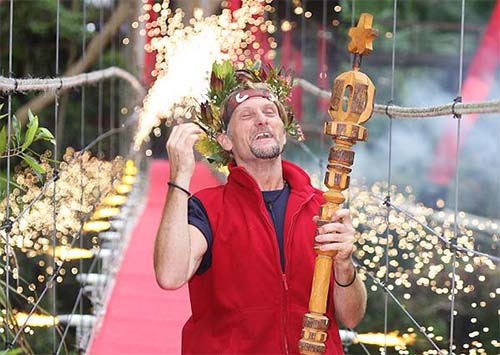 Foggy is the new King of the Jungle after winning this year’s I’m A Celebrity… Get Me Out of Here! Show on ITV.

Carl beat former X Factor contestant and bookies’ favourite for the title Jake Quickenden. TV presenter Melanie Sykes finished third in the final of the ITV show, which is hosted by Ant and Dec.

And it has been revealed that Carl won all but one of the public votes by a comfortable margin.

Foggy lasted more than three weeks in the Australian jungle taking part in various bushtucker trials to beat 11 other celebrities.

He shed some tears as he took his place on the I’m A Celebrity “throne” in front of fellow camp-mates before hugging his wife, Michaela, and daughters, Danielle and Claudia.

He told presenters Ant and Dec: “I just think it’s all a dream, someone’s playing a trick on me. “This is the best thing that has ever happened. It’s absolutely mental. I don’t know what, but I must have done something right.”

On his return to the UK, Carl added: “I am genuinely blown away by the support I have received. I was used to winning as a motorcycle racer, but that was my job. This was something completely different and way out of my comfort zone. So to win something by people saying that they liked what they saw of me is just so humbling.”