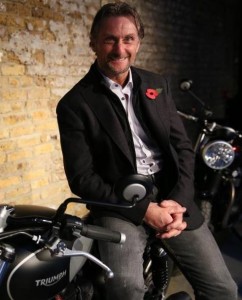 Foggy will return to the Goodwood Festival of Speed for the first time in eight years this June to celebrate Triumph’s glorious heritage.

Carl will ride two of the British marque’s current bikes, the Speed Triple and the Thruxton R. He will also ride two bikes supplied by the National Motorcycle Museum, the Triumph Bonneville that Malcolm Uphill took to victory in the Production TT and the 750cc Production TT winning Triumph Trident, known as ‘Slippery Sam’.

Foggy will ride these four bikes a total of four times over Saturday and Sunday at the Festival (25th-26th June), forming part of the joint Triumph/National Motorcycle Museum “Past and Present” feature.

Carl said: “Goodwood is a special event in the motorsport calendar and I’m thrilled to be representing Triumph, especially on such iconic bikes from the past and present. Expect a performance!”